A worker was entitled to medical and disability payments under the Massachusetts worker’s compensation statute for a work related injury even though there was evidence in his own medical record that he had a pre-existing back condition.

The Massachusetts Appeals Court determined that the insurer for the employer had failed to produce evidence to overcome the opinion of the worker’s chiropractor that the injuries were primarily related to the new injury, rather than the pre-existing degenerative back condition, as was required under G.L. c. 152, s. 1(7A).

On December 31, 2004, Scott MacDonald was cleaning up a worksite at the end of a work day. While lifting buckets of waterproofing, he felt a tightness in his back, which did not seem sufficiently serious at the time to prevent him from completing his workday. However, the following day the pain became excruciating, and he sought treatment with a chiropractor, which continued for the next four months.

The chiropractor also recommended that he obtain an MRI, which revealed disc herniations and degenerative changes. MacDonald then sought treatment from a group of neurologists, whose reports referenced prior back injuries and treatment, and made a diagnosis of pre-existing degenerative disc disease. The records show that MacDonald’s condition was improved in March, 2005 and he was back to work by the beginning of May, 2005.

McDonald sought benefits for a work related injury, which his employer’s insurer challenged on the basis that his injury was pre-existing and not work related. An administrative judge heard MacDonald’s claim and awarded medical benefits, temporary total incapacity from January 1, 2005, to March 15, 2005, and temporary partial incapacity from March 16, 2005, until April 30, 2005.

END_OF_DOCUMENT_TOKEN_TO_BE_REPLACED

A serious and deadly construction accident, which took place in downtown Boston on Saturday, February 7, 2009, reminds of the dangers associated with construction related work, and in particular work being performed at high elevations using lift equipment.

In the Saturday incident, a mobile lift toppled and fell into a vacant lot used by the Brattle Book Shop, where there were several patrons present. The falll killed a construction worker who was working on the lift and severly injured a second worker. It is reported that the crane was being used to inspects roofs on a Suffolk University Dormitory, which recently opened on West Street, several blocks from downtown crossing.

According to fire officials the two men involved in the accident were working for Reliable Roofing & Sheet Metal LLC of Framingham, Massachusetts. It appears that Suffolk had hired Tremco Inc. of Beachwood, Ohio, to inspect the roof of the building located at 10 West Street. Tremco then subcontracted with Reliable Roofing to do the work. The lift being used had been rented from Equipment 4 Rent, located in South Boston and West Bridgewater, Massachusetts.

This was the second fatal accident involving lift and staging equipment in downtown Boston in the last year. The prior accident took place at a building a few blocks away on Boylston Street being renovated by Emerson College, which killed another construction worker as well as the operator of a motor vehicle, which was passing on the street below.

In such accidents, a worker is barred from suing his employer by the Worker’s Compensation Act in Massachusetts. However, claims can be made against other “third parties” involved in the work, but only if it can be proved that their acts and/or omissions were a contributing the cause of the accident.

END_OF_DOCUMENT_TOKEN_TO_BE_REPLACED

The wife of an employee who suffered injuries while operating a forklift, which resulted in his death, is entitled to keep an award of $1.5 million awarded by a jury who found that the manufacturer of the forklift beached a duty it owed to the subsequent users of the machine, even though they were not its original purchasers.

The U.S. First Circuit Court of Appeals had certified a question to the Maine Supreme Court regarding a jury instruction given in the case, which was taken from the Restatement of Torts, section 10, involving products liability. The question was whether a manufacturer had a duty to warn known but indirect purchasers where a product was not defective at the time of sale, but a product hazard developed thereafter.

The Maine Supreme Court answered in the affirmative, not relying on the Restatement language, but based on the facts presented in the case, determining that liability could be established on a theory of simple negligence. This was so because the manufacturer specifically knew that this company owned one of its forklifts and therefore the risk of injury to this particular defendant was foreseeable.

The Defendant argued that it was entitled to a new trial because the Restatement jury instruction was improper, based on this interpretation. The First Circuit disagreed. Specifically, the Court found that the duty of care issue had been properly presented to the jury, and before the Court made any kind of ruling on the jury instructions, and in fact it was the Defendant who had requested the Restatement instruction.

END_OF_DOCUMENT_TOKEN_TO_BE_REPLACED

A police officer who prevented an suspected prostitute from leaving a hotel by grabbing her in a hotel hallway and then detaining in her in a hotel room, after physically preventing her from leaving the premises, may be liable for personal injuries as the result of using excessive force, but not for wrongful detention, according to the U.S. Court of Appeals.

The case involved a prostitution sting, which took place in a hotel in Portland, Maine in March, 2006. The hotel room was set up for video and audio surveillance, with officers and a prosecutor set up in an adjoinging hotel room. The Plaintiff had responded to a telephone request for an exotic dancer to come to the hotel. An undercover officer was in the room impersonating a customer seeking sexual favors.

The Plaintiff entered the room, and was asked to undress, but suspicious of the circumstances, told the officer she was only there to dance and then asked the officer to take his clothes off. He refused. She then agreed to undress, but quickly discerned that the police were involved. Money was sitting on the dresser and the woman took a $20.00 to “pay for her trouble”, and commenced to leave the room and the hotel.

However, she was apprehended in the hallway by a police officer who had been in the adjoining room. He grabbed the Plaintiff by the arm, put her against the wall, and then took her back into the hotel room to further question her. She was ultimately permitted to leave without any arrest. The Plaintiff went home, called the police, and later went to the hospital, where was treated for injuries to her arm and shoulder, which later was diagnosed as a torn rotator cuff.

The Plaintiff filed a 42 U.S.C. 1983 action, claiming her civil rights had been violated by the police officer, alleging wrongful detention and excessive force. The Defendant moved for summary judgment, which was granted by the U.S. District Court Judge, finding that the police officer had probable cause to detain the Plaintiff based on the “pooled knowledge” of the police present, and specifically because the Plaintiff had stolen the $20.00 bill (although she gave it back at the hotel). The judge ruled that the detention, and force used, were reasonable, given that there was probable cause for an arrest and that the officer had limited immunity in carrying out reasonable and appropriate police activities.

END_OF_DOCUMENT_TOKEN_TO_BE_REPLACED

The Massachusetts Supreme Judicial Court has determined that the Workers’ Compensation Trust Fund must pay benefits to an employee of a tree cutting company who failed to obtained workers’ compensation insurance based on the employee’s total earnings, including wages earned from a second job with an insured employer. 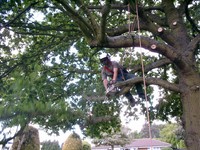 The thirty-three (33) year old worker suffered a severe injury in September, 2001, when a tree limb fell onto him, severing his spinal column and leaving him a quadriplegic. and totally disabled. The tree service had violated the Workers’ Compensation Act, G.L. c. 152, s. 25A, by not carrying workers’ compensation insurance. The worker earned most of his income from a second job with another company, which was properly insured, but because the injury occurred while he was working for an uninsured employer, the trust fund was required to pay all of his benefits.

Following the accident, the worker filed for workman’s compensation benefits, seeking two thirds of his average weekly wage from both jobs because he was totally and permanently disabled. The Trust fund objected and an administrative judge thereafter issued an order awarding benefits from the date of his injury calculated by considering only his average weekly wage from the uninsured employer.

Both parties appealed, and at a de novo hearing before the same judge, but with a stipulation that the worker was permanently and totally disabled. This time the judge ruled that the trust fund must pay permanent total incapacity benefits based on the worker’s average weekly wage from both employers.

END_OF_DOCUMENT_TOKEN_TO_BE_REPLACED

The attorney is a Boston civil trial attorney licensed to practice in Massachusetts and New York. He has been litigating in state and federal courts in Massachusetts, New York, New Hampshire, Rhode Island and Vermont for nearly thirty years. He graduated from Yale University in 1976 and from University of Virginia Law School in 1980. He began his legal career in Paris, France and is fluent in French. In 1981 he returned to the U.S. and opened his own law practice in Cambridge, Massachusetts. He spent several years in the late 1980’s with a boutique Boston litigation firm, where he handled all the firm’s personal injury work. In 1987, he left the firm to reopen his own practice and has maintained his own law practice ever since.

While the attorney has trial experience in many practice areas (including criminal, divorce and probate), his primary focus has been civil trial practice, with an emphasis on plaintiffs’ personal injury and products liability claims. Other practice areas include insurance bad faith, legal malpractice, construction law and general commercial litigation, representing both plaintiffs and defendants.

the attorney brings a unique approach to business litigation. Unlike most firms, which bill hourly fees for services and demand large up front retainers, he is often prepared to represent claimants on a contingent fee basis, receiving payment only upon a successful recovery by trial or settlement.

While not every claim is appropriate for contingent fees, the attorney is prepared to review and evaluate potential claims at no initial cost to the client, and when appropriate, will enter into fee agreements contingent at least in part on the success of the case. This permits litigants to prosecute or defend claims knowing from the outset what it will cost to proceed with a claim.

The key to success in litigation, and in particular contingent or fixed fee cases, is objective and realistic early evaluation of the merits of a claim. This requires cooperation from the client in providing all the facts and producing all the relevant documents from the outset. There should be no surprises after the commencement of an action.

END_OF_DOCUMENT_TOKEN_TO_BE_REPLACED

The Massachusetts Appeals Court has confirmed a ruling by the Industrial Accident Board that a Boston corrections officer suffered emotional injuries related to his employment, and therefore was entitled to benefits, when inmates threatened to disseminate false stories about his harassment of prisoners, and those stories were later published in the Boston Herald.

Cosmo Bisazza was a corrections officer who in 2003 worked in a special housing unit at the Massachusetts Correctional Institution in Concord, Massachusetts. The unit provides separate housing for gang members, pedophiles, murderers, and sex offenders to protect them from attacks by the general prison population. Bisazza did Cosmo BISAZZA’S CASEnot suffer job-related stress or anxiety prior to 2003, and had no prior history of psychiatric or emotional difficulties.